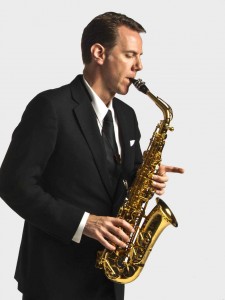 Hailed by The New York Times as a “virtuoso…one of the foremost saxophonists of his generation”, “brilliant” (The Guardian, UK), and “a sterling saxophonist” (The Baltimore Sun), TIMOTHY McALLISTER is one of today’s premier soloists, a member of the renowned PRISM Quartet, and a champion of contemporary music credited with dozens of recordings and over 150 premieres of new compositions by eminent and emerging composers worldwide. His rise to international fame came in 2009 with his celebrated work in John Adams’s “City Noir,” filmed as part of Gustavo Dudamel’s inaugural concert as music director of the Los Angeles Philharmonic, and the world premiere of John Adams’s Saxophone Concerto in August 2013 with the Sydney Symphony Orchestra under the baton of the composer in the Sydney Opera House. Subsequent critically-acclaimed U.S. premieres with the Baltimore Symphony Orchestra and St. Louis Symphony followed, along with engagements with the Milwaukee Symphony Orchestra, Orquestra Sinfônica do Estado de São Paulo, Cabrillo Festival Orchestra, BBC Symphony Orchestra at the London Proms, Royal Liverpool Philharmonic and the New World Symphony, among others.

A renowned teacher of his instrument, he has served as Professor of Saxophone at Northwestern University (IL), a Valade Artist Fellow for the Interlochen Center for the Arts (MI), and is a clinician for the Conn-Selmer and D’Addario companies. In September 2014 he joins the faculty of the University of Michigan School of Music, succeeding his legendary mentor, Donald Sinta. McAllister’s work can be heard on the Nonesuch, Deutsche Grammphon, Naxos, OMM, Stradivarius, Centaur, AUR, Albany, Parma, New Dynamic, Equilibrium, New Focus and innova record labels.