Two performances: On and off, off and on by Anthony Vine melds the live saxophone with electronic soundscape, and a premiere written specifically for the 2015 Word Saxophone Congress by John Hilliard 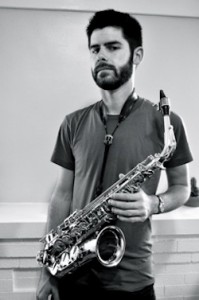 Evan Smith is currently a doctoral candidate at the University of Washington in Seattle. He holds degrees in saxophone from the University of Northern Iowa and James Madison University. At JMU, he won the 2011 Concerto Competition, performing Glazunov’s Concerto. In 2012, he premiered two new works for alto saxophone at the WSC in St. Andrews. He continues to actively commission, perform, and record new music for saxophone around the United States.

Evan is also an experienced educator, appearing at schools and universities around Seattle while maintaining an active private teaching studio. In his current research interests, he is working to document and record the composed saxophone works of Yusef Lateef.

I will present two recent works I commissioned for alto saxophone.

The first, titled “on and off, off and on” was commissioned for premiere at the 2013 North American Saxophone Alliance Region One Conference. Composed by Anthony Vine, the piece seeks to meld the live saxophone part with an electronic soundscape that derives its material from the sound of fluorescent lights and their switches. The piece features numerous microtonal sections, multiphonics, and bisbigliando.

The second piece is a premiere written specifically for the 2015 Word Saxophone Congress. Composed by John Hilliard, this four-movement unaccompanied work takes its inspiration from paintings completed by the composer’s wife. It features a strong emphasis on melody and dynamic contrast.